Proper socialisation will help your dog learn to cope with anything life throws at him, writes Kate Potter.

Just like any other type of training, socialisation — exposing your four-legged friend to a wide range of situations, settings, animals and people — is something that is best started in puppyhood and continually practised throughout a dog’s life. 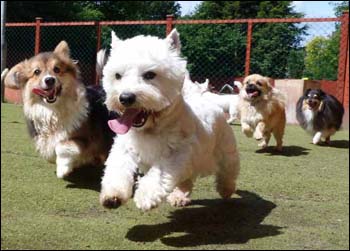 The first 16 weeks of a pups life are very important, as a puppy’s experiences during this period play a significant role in shaping their adult behaviour. By about seven weeks of age, puppies become curious about different relationships and will be interested in humans and other animals beyond their littermates.

Given your puppy will stay with his mother until around eight weeks of age, it’s worth knowing what his environment will be like. While your pup’s mother will ensure his basic needs are met and teach him about canine interaction, make sure that he also has somewhere to play with other dogs and animals and can experience different sights, sounds, smells and textures as he becomes more independent. Teaching your dog good social skills can start as soon as you get home. Trainer Sam Lewis, from Sherlock Bones in Adelaide, says training should start from day one. “As soon as you get your dog, start teaching him boundaries for good behaviour at home before you take him out,” he says.

Once you’ve got control at home, it’ll be much easier to work with him in different and unfamiliar situations. Like children, it’s important for young dogs to learn manners. Many people will sign up for puppy classes, but Lewis suggests that this may not be as good an idea as it seems. “At an early age, dogs can learn whether they’re going to be a bully, or be bullied,” he explains. Group classes can be fine for some dogs but what looks like chaotic entertainment is often about sorting out who is in control. “Big classes can teach dogs bad manners about how to treat one other. They go and jump all over each other, which might look like fun, but can actually be quite aggressive,” says Lewis.

You can help prevent your dog developing social issues by starting his training in calm and controlled environment. “Most group classes are really high energy and dogs get all excited. Any training and reward system that you do in that sort of class means you’re positively reinforcing your dog’s excitability and he’ll think that it’s the way he’s meant to behave,” says Lewis.

Hannah Spackman’s Groodle, Archie, was given lots of stimulation from the time he came home. “We knew we were going to have a family in a couple of years, so we wanted to make sure he was going to be chilled out,” Spackman says.

Archie entered a home with two cats and was given plenty of human attention from people of different ages. After giving him a week to settle in and once his vaccinations were done, the Spackmans ensured that Archie had a new experience every day.

“We took him in the car, tried different parks, walked down new streets, visited lots of people and even did things like taking him out in the rain so that he could see umbrellas and not be scared of them,” she says.

Whether training a puppy or an older dog, Lewis says one of the main things the dog needs to know is that you’ll look after him and that he’s safe, “For a dog to learn to feel safe, he needs to know you are in control and will protect him from different situations,” he says.

Don’t forget that dogs are very intuitive animals, so if you are calm and balanced when you talk to him, he’ll understand that everything is okay. Developing a bond of trust at home is an important starting point, particularly for older dogs who weren’t properly socialised as puppies.

“Once you’ve got good control of your dog at home, take him near other dogs that are calm and under control and do some training and exercises near them, keeping your dog’s focus on you,” says Lewis. This technique will soon allow your dog to see that nothing bad is going to happen and that it’s OK for him to maintain his composure around other dogs.

“Once your dog is comfortable in the presence of other dogs, you can let them play,” he says. “If the introduction is correct, playing will be fine — as long as any rough play is reciprocated and you have the control to stop play at any time,”

Be conscious of your dog’s distress signs, like constantly looking back to you or running to hide behind you. If he’s finding playtime intimidating, calmly remove him from the situation. Put enough space between him and the other dog that he can feel safe and comfortable and his stress diminishes.