Want to make sure your new arrival is the best behaved puppy on the block? Dogs Life editor Laura Greaves reveals how to get your pup off to the best start.

Just as with children, raising a polite pooch begins from puppy hood.  Trainer Sam Lewis, from Adelaide’s Sherlock Bones says teaching your puppy how to behave the way you want should start from day one. 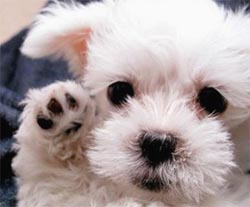 Just remember that every puppy is different and each learns in his way and at his pace. “there’s not a one-fits-all training method that works on all dogs, but there are a lot of trainers that only use one method. Use a trainer well versed in a variety of methods, so they can pick the best method for your dog” says Lewis.

1. How do I teach my puppy to go outside to pee?

For most dog owners, puppy toilet training is the most important lesson they want their puppies to grasp, but it’s arguably also the most frustrating. Some puppies learn quickly where and when to do their business, while others will have plenty of “accidents” as they come to grips with this new skill. Lewis says the keys to success are patience and consistency. ‘Dogs are creatures of habit. so the more they go outside, the more they will want to go out.“ he explains.

“With a young puppy, take him outside to the spot where you would like him to toilet every hour when possible. When not possible, the main times he’ll need to go out are as soon as he’s eaten or drunk, as soon as he’s woken up, after exuberant play and as soon as you get home.“

If you live in an apartment, or you’ve decided to toilet train indoors using “pee pads’ before progressing to the great outdoors. placement of your pup’s loo is everything. ‘A lot of people get frustrated because their puppy won’t use the toilet pad, but often they’re putting it too close to his bed. Most dogs won’t toilet where they eat. drink or sleep.‘ Lewis says. “Just as we don’t want to sleep in our toilet, dogs don’t either.”

How quickly your puppy masters toilet training depends largely on his size – bigger dogs tend to be able to ‘hold on’ longer – but most dogs can be expected to be toileting outdoors by the age of six months.

2. My pup chews everything in site! How can I get her to stop?

While it’s important to understand that chewing is a natural and necessary function for teething puppies, it is possible to teach them what’s not appropriate to gnaw on. “The most important thing when you first get a new puppy is having a good set up – that means a playpen or crate, a collar and lead. Leave things you would like your dog to chew in the playpen, and when she is out of the playpen and supervised, have her on the lead so she can’t get to things you don’t want her to chew” says Lewis.

The types of chew toys you provide are also important. “A lot of chew toys are made of plastic and it’s very hard for puppies to differentiate between plastic chew toy and a plastic sprinkler system. The wrong toys can encourage destructive behavior”. he says. Instead, go heavy-duty rubber toys that disperse treats, rope toys or virtually indestructible nylon bones.

3.  My puppy cries during the night. What techniques can I use to calm her down?

Crying or whimpering at night is normal for a newly-arrived puppy, she is alarmed at finding herself suddenly separated from her mother and litter-mates, and is calling to them. Lewis says this usually settles in two or three days. You can help to soothe your puppy by showing her that her sleeping crate or playpen is a fun place to be. “Get the puppy to spend as much positive time in there during the day as possible,” he says. “Sit in there with her until she falls asleep, feed her in there, play in there. She’ll begin to associate it as a good place, so it’s not such a rude shock going from being with everyone all day to being shut away in the playpen at night.”

Difﬁcult though it may be, resist the urge to cuddle your pup or allow her to sleep in your bed when she cries. “I don’t think it’s a problem if, on the ﬁrst night, you give her a pat and help her fall asleep, but beyond that it reinforces the behavior,” says Lewis.

4. I want my puppy to get on well with the other dogs at the park — what should I do?

First, don’t take your puppy to the dog park straight away, a bad experience early on could have a lasting impact. If a big bouncy Labrador jumps up on your puppy and hurts him, even though it wasn’t intentional, your dog learns to fear other dogs,” Lewis says.

It’s crucial to get those ﬁrst interactions with other dogs right. Find a friend with a calm, gentle dog and introduce your puppy in a relaxed, controlled way. Once he’s had some positive experiences with other dogs, you can move on to playing with dogs of a similar size at the park. “Make sure the dogs you choose to socialise your dogs with are behaving the way you want your clog to behave. Socialization is not a free—for-all,” he says.

5.  My puppy spends up to 10 hours a day alone while I’m at work. How can I teach him to enjoy his own company?

All puppies will have to spend time alone eventually, and Lewis believes it’s vital that dogs learn how to live independently. The best way to teach this is to leave him alone for short periods while you’re at home, so he learns not to stress when you’re away. “Put him outside or in the playpen when you’re home. Give him positive time apart from you whenever he has something to eat, when he goes to sleep or wants to play with a toy,” he says. “The worst way to prepare him for being home alone is letting him do whatever he wants when you’re there, then suddenly locking him outside when you go to work.”

6.  Ever since my pup discovered his voice, he barks at every little thing! How can I control his barking?

According to Lewis, dogs generally only bark for two reasons: to call their pack, or to tell something to go away. Puppies tend to bark when they’re overexcited, they’re calling you and their canine siblings to join in the fun! Lewis says it’s important to nip excessive barking in the bud. “1t’s usually caused by over stimulation of the puppy. Have him under control on a collar and lead when you bring him out of his crate, and stop it getting to that point straight away,” he says.

7.  My puppy leaps all over my kids. What should I do?

This is another situation caused by over-stimulation, so it’s important to teach children to be calm around dogs. It can create real problems down the track if pups grow up being allowed to clamber all over people. “Height equals control in the dog world, so if you allow your puppy to jump all over your children, that’s teaching the dog that she’s ‘above’ the kids in the pecking order,” Lewis says.

“The ﬁrst couple of interactions should be with a soft collar and lead, keeping the situation under control.” Don’t let your kids over excite the pup when they arrive home. “If you fall all over the puppy when you Walk in, that’s reinforcing the behaviour. Try not to get the puppy all riled up.”

8.  My puppy is really “grabby” when I treat him. How can I teach him to take food gently?

Many puppy owners believe their pets should only receive treats as rewards for responding to obedience commands or performing tricks, but if food is dispensed at the same time as lavish praise, pups can become too excited and snatch at the food.

Puppies are more likely to remember their table manners if they’re calm when treated. “There’s nothing wrong with treating your dog just because you feel like it. Don’t treat your puppy when he’s over stimulated, only reward him when he’s relaxed,” Lewis says.

9.  At what age should my pup start obedience training?

There’s no such thing as “too early” when it comes to training, but it’s important to have a laid-back approach  the serious obedience classes can come later. “You’ll be feeding your puppy three to four times a day, so take advantage of it. The ﬁrst thing could be teaching him not to jump. If he sits nicely, then give him his food,” he says. “Then you can move on to making him wait a moment to eat, and so on.”

10.  When my puppy misbehaves, I respond with a stern “No!”, but she just ignores me! What can I do?

If your puppy carries on misbehaving even when you admonish her, your “serious” voice has lost its impact. “1n most cases, the ones that don’t respond to a stern ‘no’ have been reprimanded too much,” Lewis says. “It’s the same with humans if I drop my towel on the ﬂoor and my partner yells at me every day, eventually I don’t pay attention to it. If people are always ‘at’ their dogs, it just conditions them to chaos.” Discourage unwanted behaviour by ignoring it, or redirecting the puppy to an appropriate behaviour. Save your stern tone for when you really mean it. “Use that stern tone just for the odd occasion. Most puppies will respond to it and if you’re doing everything else right, you probably won’t have to use it very often,” he says.